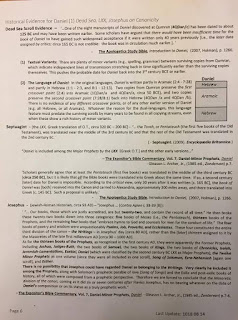 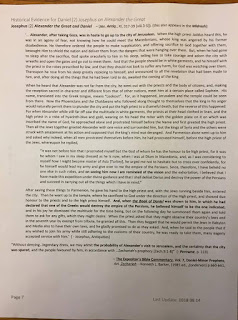 Posted by roguephysicist at 7:52 PM No comments: 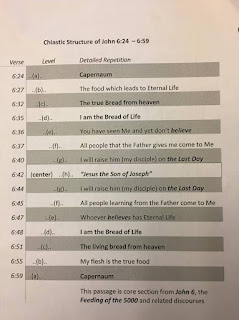 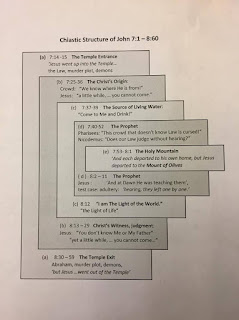 Posted by roguephysicist at 7:49 PM No comments: 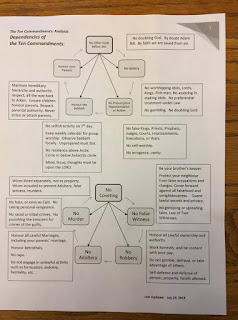 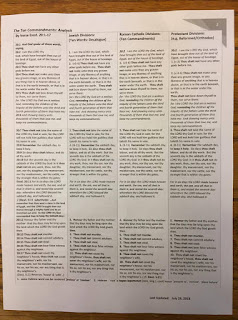 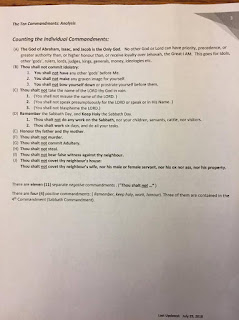 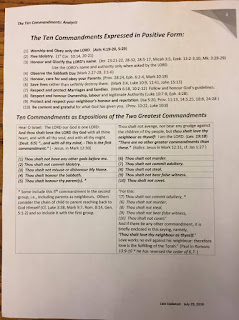 Posted by roguephysicist at 7:48 PM No comments:

O.T. Quotation Structure: Gospel of Luke and Gospel of Matthew 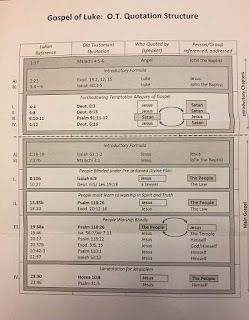 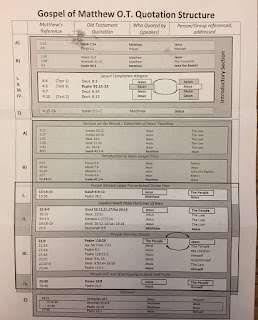 Posted by roguephysicist at 6:31 PM No comments:

O.T. Quotation Structure GOSPEL OF MARK AND GOSPEL OF JOHN 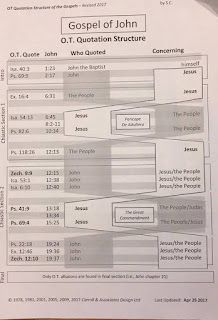 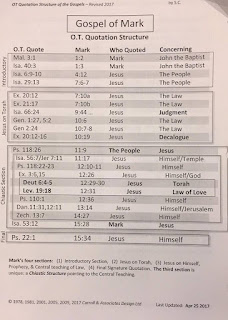 Posted by roguephysicist at 3:33 PM No comments:

One seemingly rather effective critic of KJVOnlyism has been Doug Kutilek, who appears relentless in his attacks on various aspects of the issues around the KJV Bible.

In an article on the "genealogy of KJV-Onlyism" The Bloodline of History, Kutilek attacks just about every historical advocate for the KJV as either a charlatan, a fraud or a dupe.   For instance, he violently attacks the following list of authors as follows:


Benjamin Wilkinson (1930, Our Authorized Bible Vindicated) - "Wilkinson attacked ...Westcott and Hort personally (fallacious ad hominem). He also opposed the RV (1881)...because it robbed [Seventh Day] Adventism of 2 favorite proof-texts (Sabbath keeping, Acts 13:42, 'Soul-sleep', Heb. 9:27). Wilkinson was the first to misapply Ps. 12:6-7 to the KJV... Wilkinson also manufactured the erroneous idea that the Waldensian Bible was based on the Old Latin (= Byz. text-type).

David Otis Fuller (1970 Which Bible?, 1975 Counterfeit or Genuine) - "almost half the pages [of Which Bible?] were taken from Wilkinson, with some editing to conceal Wilkinson's cult affiliation.  Fuller knew well that Wilkinson was an Adventist and deliberately concealed that fact..."Fraud"...knowingly misrepresented the views of Spurgeon re: the TR, KJV, & RV, ...misrepresented R. D. Wilson re: the RV.  Fuller also dragged Anglican priest [Dean] John Burgon founding the Dean Burgon Society.  ...ready and willing to conceal, ...distort, and invoke, ...to deceive his readers...Fuller's blatant dishonesty and disregard for truth...the vast majority of this highly destructive controversy is a direct result of Fuller's deceptive and inflammatory book."

Peter S. Ruckman (1964 The Bible Babel, 1970 Christian's Handbook, etc.) - "passes for a Baptist preacher, ... All of his writings are characterized by the most vehement vilification and denunciation of everyone and anyone...torrent of errors flood each work... his "hermeneutical" approach... is so nonsensical, ...first propagated the erroneous idea that the KJV has no copyright...

Gail Riplinger ( New Age Bible Versions) - "Now, women are getting in on the KJV-Onlyism act, profiting from the gullible multitude seduced...perverse propaganda... "too much" for even some fellow KJV-Onlyites to swallow..."

Edward F. Hills (1956 The KJV Defended, 1967 Believing Bible Study) -  "The theme of Hills' work is the defense of, not just the Byzantine text-type ..., but the defense of the Textus Receptus [TR], including the unique (i.e., unsupported) readings... by Erasmus. On the whole, Hills' writings are much better-informed and more accurate than nearly all of the KJV-Only literature, though he writes as one blinded to evidence by his presuppositions. ..."

With an intro like that, every uncommitted reader is likely to go out and buy Hills' books.   Its as if  Kutilek wanted to restrict the education of the public and promote certain lines of argument on BOTH sides of the issue, in the process steering everyone away from 9 out of 10 KJV defenders.   That this isn't just a guess, is shown by Kutilek's obsession with monetary issues:


Wilkinson: "a book which attracted almost no attention in its day...
"J. J. Ray's book has gone through numerous printings, with total copies numbering perhaps in the tens of thousands. ...
D. O. Fuller: "in its 5th edition by 1975 ... has had a very extensive influence in shaping much of the current debate and disseminating much of the misinformation that characterizes KJV-Onlyism today.Ruckman has "single-handedly has injected more misinformation into the controversy than all other writers combined."
Riplinger: "profiting from the gullible multitude"

Clearly Kutilek is shouting essentially "Don't Buy!" any of these authors' works. While in comparison to this treatment, Kutilek has rained down a golden handshake ranging from neutrality to praise upon E. F. Hills. Why?

Anyone who has examined, or even looked at the covers of E. F. Hills' work, is immediately struck by the near-childish, patronizing and patriarchical tone of the books.  Its as if they were deliberately written for children or teens, or near-idiots: 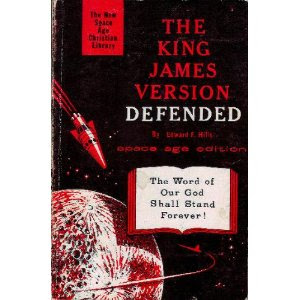 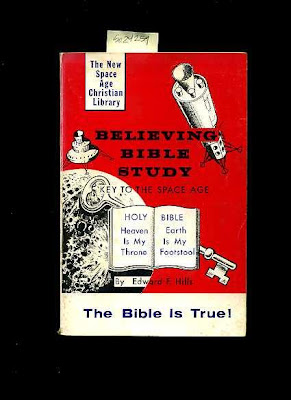 As much as I enjoyed the contents of these two books, they can hardly appeal in appearance or format to anyone over 18 years of age.  Serious scholars will think they are actually some kind of joke.

This is where Kutilek would like to direct sincere inquirers concerning the complex textual issues of the Byzantine text-type vs. the Alexandrian!   This is Jesuit counter-productivity at its best.

Where serious debaters should be directing people, is to Dr. Maurice Robinson's excellent article on Byzantine Priority, or the very balanced introduction to the modern debate edited by D. A. Black, Rethinking New Testament Textual Criticism, or even Sturz, The Byzantine Text-type.  Other useful titles would be the books and articles by G.D. Fee, or E. J. Epp.  The thorough research by James Snapp Jr. on Mark's Ending, or any of the recent publications on the papyri, such as those by Royse, Jongkind, or Hernandez would be intelligent suggestions.

Its clear that polemicists like   Kutilek have no real interest in assisting readers to learn enough useful information, to make any kind of informed decision on the 'KJV' issues.

Marvin Vincent (1903) on Burgon vs Abbot

In his book, A History of the Textual Criticism of the New Testament (Macmillan, 1903), Marvin Vincent attempts to bolster the Westcott/Hort position, in part by dismissing opponents.

An example of how badly Vincent handles even the tasks of propagandizing, is given in his discussion of the dispute between Dean Burgon, and Ezra Abbot, over the dating of Codex Aleph and B.   Here (on p. 119-121), Vincent quotes Burgon for a page and a half.  Then only notes "Burgon was answered by Ezra Abbot..in the Journal of the American Oriental Society, 1872, X, 189-200, 602."
Although attempting to ridicule Burgon, he seems to help his cause more than hinder it.


An actual examination of both Burgon's full arguments re: dating and Abbot's disagreement is revealing, because Abbot often agrees with Burgon, and although bringing new information to light, hardly refutes him.   One can fruitfully compare the two by reading their own words below:

A good discussion of the question of who actually comes out better in this debate was given by Mr. Scrivener on TC-Alt list over a year ago:


Nazaroo has promised to comment shortly on Abbot's and Burgon's debate,
regarding subsequent analysis and fallout.

My own take is that Abbot correctly restrained Burgon's exhuberance, but made about as many mistakes in method as Burgon:

(1) Abbot's rejoinder is based upon the shoddy 2nd-hand info in Tischendorf and the Vatican's published transcripts (lets not call them facsimiles), while Burgon's descriptions are based on his many years of handling MSS himself, and his personal inspection of Vaticanus for a few hours (in those days a miraculous priviledge).

1a.] Abbot admits to the problem of the descrepancies between Tisch. and Rome at least three times...

1b.] Burgon is still best at describing the physical condition and appearance of the MSS. He saw and handled them, applying his many years of experience. Abbot was in America, with only published transcriptions at his disposal.

(2) Abbot rightly notes Burgon's personal interest (and bias?) in defending the Markan Ending, but doesn't really address Burgon's arguments directly. He restricts himself to attacking the premise of Burgon's appendix, but tries to leave the impression that he has "refuted" Burgon's main thesis on the Authenticity of MarkEnd.

2a.] Abbot's own enthusiasm for Tregelles and Hort stands out like a sore thumb (he was on the American Revision committee and uses Tregelles, Hort, and Scrivener as authorities).


(3) Abbot correctly exposes the weakness of several points by Burgon regarding the relative age of Sinaiticus, but when the dust settles, Sinaiticus remains significantly different in execution and style than Vaticanus,

3a.] ...and the differences are still best explained by a "generational" change in how things were done in the Caesarean scriptorium.

3b.] It doesn't matter that key features of the differences are in fact not
original to the 4th cent. A.D. or are found in other contexts. Its the
combination that counts. What matters is what was practised in the Caesarean scriptorium itself at different times, not what inspired their habits, or where stylisms were borrowed.


(4) Abbot brings up the already outdated opinion of Scrivener connecting both MSS to the order of 50 Bibles by Constantine to Eusebius. But that is not credible, given the content and form of both Vaticanus and Sinaiticus. Skeat suggests probably only one, Vaticanus, was a dud from such an order, which was never delivered, but got used somewhere else.

(5) Abbot uses Tregelles' observations twice, but he only remarks that the script looks the same, and Aleph looks older than a 500 A.D. MS, and this is already pretty much conceded (although unproven). Its not relevant to the argument any more than some of Burgon's points are, in isolation.

5a.] All this simply shows the difficulty of nailing down any MS within +-100 years.

(6) Perhaps most "devastating and fatal" to ABBOT's argument, is his appeal to the "well-known tendency of copyists and possessors of MSS to add rather than to omit", an 'observation' now known by careful studies of scribal habits to be pure crap.

6a.] Whats worse, he actually applies this canon to the Ending of Mark, a massive absurdity. Its as if a 'copyist' accidentally or by 'tendency to
conflate' or incorporate marginal notes added an entire 12 verse ending to Mark without really noticing!

Is that really more plausible than Burgon's proposal that it was a lectionary pericope that was left out of service books, and/or was avoided because of doctrinal squabbles?

To put it in perspective, it would be like being assigned to paint a copy of the famous Mona Lisa, and while daydreaming, adding a large red barn to the background.

Suffice it to say, Abbot's rebuttal is hardly devastating, but does contribute to toning down Burgon's rhetoric somewhat.

I don't know what Nazaroo will say, but he was snickering at Abbot's poopooing of Scrivener, over the Eusebian Canons. It does seem silly to claim the absence of them in the prima manu could support Eusebius' connection to these MSS in any way.